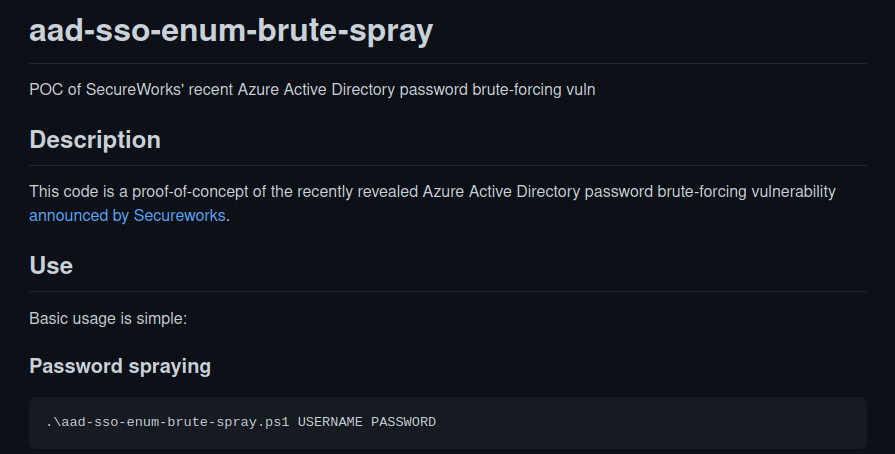 An unpatched security weakness in Azure Active Directory might be leveraged by attackers to conduct undetected brute-force attacks, according to security researchers.

A password spraying PoC was published 3 days ago on GitHub.

The Response from Microsoft

Microsoft said that this method does not constitute a security vulnerability and that measures are already in place to protect Azure users: “We’ve reviewed these claims and determined the technique described does not involve a security vulnerability and protections are in place to help ensure customers remain safe and secure,” a Microsoft spokesperson told ArsTechnica.

Furthermore, Microsoft says, tokens issued by the WS-Trust usernamemixed endpoint do not provide access to data and need to be presented back to Azure AD to obtain the actual tokens. “All such requests for access tokens are then protected by Conditional Access, Azure AD Multi-Factor Authentication, Azure AD Identity Protection and surfaced in sign-in logs,“.

But, Secureworks also shared additional insights that it received from Microsoft after publishing its analysis this week, indicating Microsoft is working on a solution.

“First, the log in event will be populated to Azure AD sign-ins logs. Second, organisations will be given an option to enable or disable the endpoint in question. These should be available for organisations in the next couple of weeks,” Syynimaa told Ars.

Azure AD also comes with a “Smart Lockout” feature designed to automatically lock accounts that are being targeted for a certain amount of time if too many log-in attempts are detected.